So I’ve been MIA again, oh well, real life drama happens. In fact our unplanned trip to the city last Saturday was a result of string of not-so-good luck, but when life give you lemons, make lemon water (that’s the healthier choice nowadays 😅).  So we took the BART, and instead went to Union Square.

Sidestory. We have aunts visiting from LA, and we made plans for a Sacrament Tour. Our car broke down on the way, so we had it towed by Triple A (Thank you, Triple A, glad for the membership, better safe, than sorry!👏🏼) . We’re in San Pablo, and thankfully that there’s still a Bart Station near us. We’re out of luck renting a car as they closed at 12nn. Just in case I don’t do a full post about it, allow me to rant on the hateful customer service of Hertz near that area. She kept on insisting “I close in 1 minute!!!” non-stop instead of answering my question if they can wait and help us. 🙄So we had half day, and we decided to take the BART to the city. More misadventures awaited, apparently on weekend, there’s a portion that you had to take the bus, so a supposed easy peasy BART ride became toxic. Oh well. We made it, Union Square is BARTable anyhow. 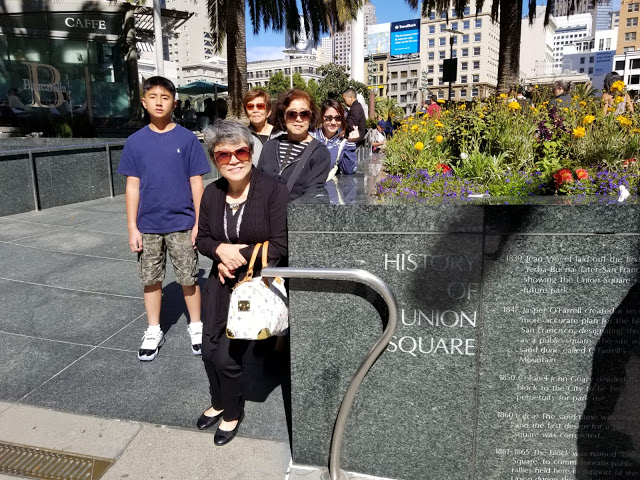 Union Square is a plaza that is bordered by Powell, Geary, Post and Stockton. One side of Union Square is Macy’s. There’s Cheescake Factory at the rooftop of it for a nice overlooking view of the square. One side is the photo op at the signature Heart of San Francisco, America’s Greatest City by the Bay by Tony Bennett with the San Francisco Golden Gate Bridge. On one side, is the giant Nike Store where the new heart is located. It changed every so often.

At the other side, corner of the square is the Neiman Marcus. Playing tourist, one needs to go inside it to see the magnificent stained-glass ceiling of The Rotunda. For me, I just like to window shop for my next Jo Malone scent.

Of all the mishaps, it still turned out to be a pleasant day. My boys were forced to tour the city again after a while. I love playing tourist in SF, it’s such a charming place and it never fails to captivate. It was short, but sweet trip. We’re out of time as we had to take the Bart going home.  On our way out, I did get more Bake Cheese Tarts. Oh well, grateful for another one fine San Francisco day spent with family and loved ones. Cheers! ✨